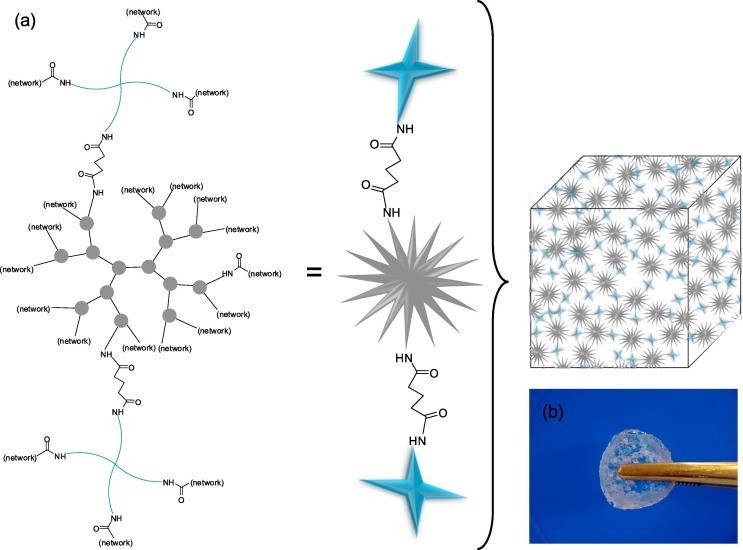 Fast in situ forming, chemically crosslinked hydrogels were prepared by the amidation reaction between N-succinimidyl ester end groups of multi-armed poly(ethylene glycol) (PEG) and amino surface groups of poly(amido amine) (PAMAM) dendrimer generation 2.0. To control the properties of the PEG/PAMAM hydrogels, PEGs were used with different arm numbers (4 or 8) as well as different linkers (amide or ester) between the PEG arms and their terminal N-succinimidyl ester groups. Oscillatory rheology measurements showed that the hydrogels form within seconds after mixing the PEG and PAMAM precursor solutions. The storage moduli increased with crosslink density and reached values up to 2.3 kPa for hydrogels based on 4-armed PEG. Gravimetrical degradation experiments demonstrated that hydrogels with ester linkages between PEG and PAMAM degrade within 2 days, whereas amide-linked hydrogels were stable for several months. The release of two different model drugs (fluorescein isothiocyanate-dextran with molecular weights of 4·103 and 2·106 g/mol, FITC-DEX4K and FITC-DEX2000K, respectively) from amide-linked hydrogels was characterized by an initial burst followed by diffusion-controlled release, of which the rate depended on the size of the drug. In contrast, the release of FITC-DEX2000K from ester-containing hydrogels was governed mainly by degradation of the hydrogels and could be modulated via the ratio between ester and amide linkages. In vitro cytotoxicity experiments indicated that the PEG/PAMAM hydrogels are non-toxic to mouse fibroblasts. These in situ forming PEG/PAMAM hydrogels can be tuned with a broad range of mechanical, degradation and release properties and therefore hold promise as a platform for the delivery of therapeutic agents.