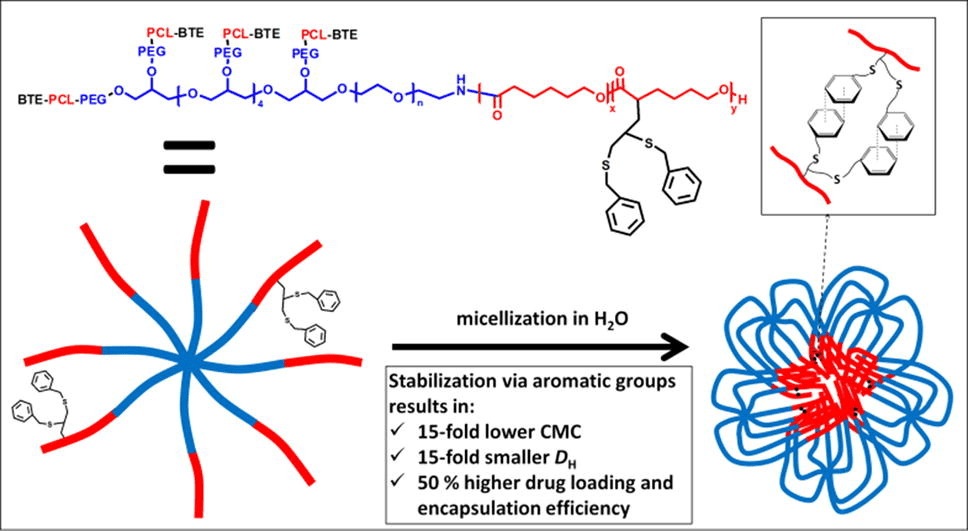 The functionalization of poly(ethylene glycol)-poly(ε-caprolactone) (PEG-PCL) block copolymers with moieties allowing for core-crosslinking is expected to result in improved micellar stability and drug delivery properties.

In comparison with unmodified PEG-(PCL)8 micelles, PEG-(PCL-BTE)8 micelles exhibited a 15-fold lower CMC, a 15-fold smaller size and a 50% higher drug loading and encapsulation efficiency thanks to the presence of pendant benzyl groups which provide the possibility for micellar core-crosslinking via supramolecular π-π stacking and additional hydrophobic interactions. Whereas the PEG-(PCL)8 micelles showed significant aggregation during in vitro cytotoxicity experiments, the PEG-(PCL-BTE)8 micelles showed no signs of aggregation and were capable of solubilizing high concentrations of curcumin, resulting in a significant decrease in MCF-7 cell viability after 48 h. Their ease of synthesis combined with promising results regarding drug delivery make the PEG-(PCL-BTE)8 micelles appealing for application in the field of encapsulation.