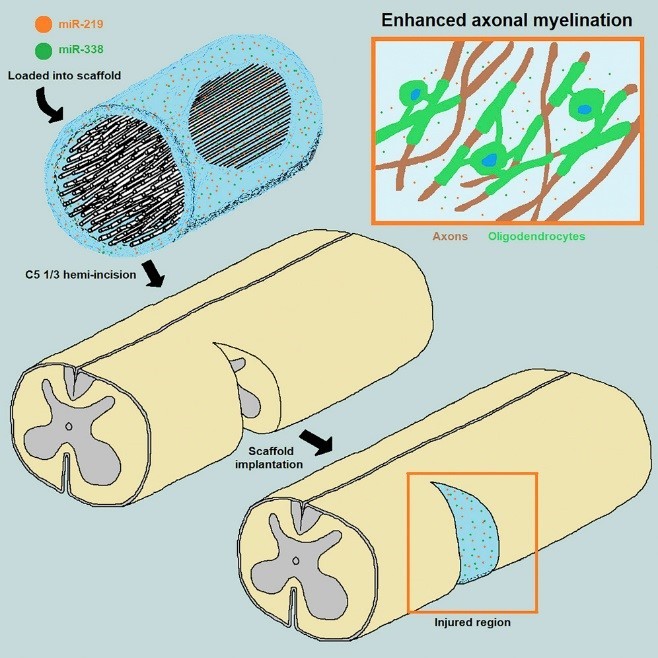 The loss of oligodendrocytes (OLs) and subsequently myelin sheaths following injuries or pathologies in the CNS leads to debilitating functional deficits. Unfortunately, effective methods of remyelination remain limited. Here, we present a scaffolding system that enables sustained non-viral delivery of microRNAs (miRs) to direct OL differentiation, maturation, and myelination. We show that miR-219/miR-338 promoted primary rat OL differentiation and myelination in vitro. Using spinal cord injury as a proof-of-concept, we further demonstrate that miR-219/miR-338 could also be delivered non-virally in vivo using an aligned fiber-hydrogel scaffold to enhance remyelination after a hemi-incision injury at C5 level of Sprague-Dawley rats. Specifically, miR-219/miR-338 mimics were incorporated as complexes with the carrier, TransIT-TKO (TKO), together with neurotrophin-3 (NT-3) within hybrid scaffolds that comprised poly(caprolactone-co-ethyl ethylene phosphate) (PCLEEP)-aligned fibers and collagen hydrogel. After 1, 2, and 4 weeks post-treatment, animals that received NT-3 and miR-219/miR-338 treatment preserved a higher number of Olig2+ oligodendroglial lineage cells as compared with those treated with NT-3 and negative scrambled miRs (Neg miRs; p < 0.001). Additionally, miR-219/miR-338 increased the rate and extent of differentiation of OLs. At the host-implant interface, more compact myelin sheaths were observed when animals received miR-219/miR-338. Similarly within the scaffolds, miR-219/miR-338 samples contained significantly more myelin basic protein (MBP) signals (p < 0.01) and higher myelination index (p < 0.05) than Neg miR samples. These findings highlight the potential of this platform to promote remyelination within the CNS.