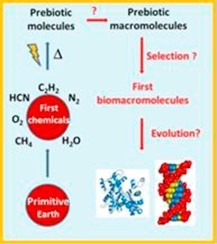 The appearance of life and thus of biomacromolecules on Earth is related to the presence of small organic molecules, polymerized under prebiotic environmental conditions. However, none of proteins, polynucleotides or polysaccharides taken individually is a true biomacromolecule, because biomacromolecules result from mutual involvements in complex biological processes. Logically, the biomacromolecules involved in the first living cells were first macromolecules formed under early Earth environmental conditions. The appearance of such living cells required macromolecules with fundamental features like controlled synthesis and structures, compatibility with aqueous media, chirality, memory, replication, and recycling that had to respect corresponding fundamentals of polymer science referred to as polymerology. After a recall of relevant basics of chemical reactions, the prebiotic appearance of macromolecules is critically compared with today’s polymer science including chirality, stability, degradation, and recycling. Instead of providing arguments in favor of consistent routes to the first biomacromolecules, the reference to polymerology emphasizes obstacles that complement those occasionally found in the origin of life literature. In front of this conclusion, the discussion is extended to the other ends of these routes, i.e. today’s biomacromolecules. The comparison with polymerology emphasizes the pertinence of the natural choices that led to the outstanding smartness of biomacromolecules. Polymerology is still in its cradle after less than a century of existence. For the future, it is suggested to pay increasing attention to chiral, multimeric multifunctional macromolecules to enrich the population of smart polymers, to solve the problem of plastic pollution, and, maybe, to enlighten the mystery of biomacromolecules emergence under unfavorable conditions.