Xavier Garric was born in Nice (France) in 1977. He first received his PharmD degree in 2001 before he obtained his PhD in 2004 from the University of Montpellier I, under the supervision of Doctors Michel Vert and Jean-Pierre Molès in the field of degradable polymeric scaffold in skin engineering. He joined the group of Doctor Michel Vert as an Assistant Professor at the University of Montpellier, in 2005. He was appointed Professor of Polymer Chemistry at the Faculty of Pharmacy in 2013 and became team leader in September 2018. His research interests are focused on biomedical applications of polymers and especially for the design of new drug delivery systems and degradable medical devices.
Part of his recent research is related to the design of an anti-adhesion, self-expanding and degradable medical device for the prevention of intra-uterine adhesions. This work led to the creation of the Womed start-up in 2018 of which he is co-founder and scientific advisor.
Another part of his research focuses on degradable elastomers for tissue engineering applications as the well as the development of new drug eluting system for implantable medical device.
Xavier is co-author of over 46 papers and 5 patents.
He is co-head of the master’s degree in health engineering, he is deputy director of the scientific chemistry department at the University of Montpellier.

Coudane J, Leprince S, Garric X, Paniagua C, Huberlant S, Letouzey V. Composition of diblock and triblock copolymers and the use thereof in the prevention of tissues adhesions. WO2016020613 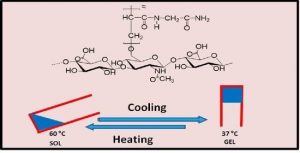 Releasing a protein according to a zero-order profile without protein denaturation during the polymeric microparticle degradation process is very challenging. The aim of the current study was to develop protein-loaded microspheres with new PLGA based penta-block copolymers for a linear sustained protein release. Lysozyme was chosen as model protein and 40 µm microspheres were prepared using the solid-in-oil-in-water solvent extraction/evaporation process. Two types of PLGA-P188-PLGA penta-block copolymers were synthetized with two PLGA-segments molecular weight (20 kDa or 40 kDa). The resulting microspheres (50P20-MS and 50P40-MS) had the same size, an encapsulation efficiency around 50–60% but different porosities. Their protein release profiles were complementary: linear but non complete for 50P40-MS, non linear but complete for 50P20-MS. Two strategies, polymer blending and microsphere mixing, were considered to match the release to the desired profile. The (1:1) microsphere mixture was successful. It induced a bi-phasic release with a moderate initial burst (around 13%) followed by a nearly complete linear release for 8 weeks. This study highlighted the potential of this penta-block polymer where the PEO block mass ratio influence clearly the Tg and consequently the microsphere structure and the release behavior at 37 °C. The (1:1) mixture was a starting point but could be finely tuned to control the protein release.

In Vivo Evaluation of the Efficacy and Safety of a Novel Degradable Polymeric Film for the Prevention of Intrauterine Adhesions.

To study the safety of a degradable polymeric film (DPF) and its efficacy on reducing the risk of intrauterine-adhesion (IUA) formation in a rat model.A series of case-control studies relying on random allocation, where feasible.The animal models comprised female and male Oncins France Strain A and female Wistar rats.The Oncins France Strain A rats were used for in vivo evaluation of the impact of the DPF on endometrial thickness and its effect on fertility. For in vivo evaluation of the biologic response, 40 Wistar rats were randomly allocated to intervention and control groups, with matched sampling time after surgery. Finally, for the in vivo evaluation of the DPF’s efficacy on IUA prevention, a total of 24 Wistar rats were divided into 3 groups: 1 treated with the DPF, 1 treated with hyaluronic acid gel, and a sham group. The DPF did not have a significant impact on endometrial thickness, and there were no significant differences in the number of conceived or prematurely terminated pregnancies, confirming its noninferiority to no treatment. The DPF did not induce irritation at 5 days and 28 days. Finally, the DPF significantly reduced the likelihood of complete IUA formation compared with hyaluronic acid gel– and sham-implanted animals, where only 27% of the animals had their uterine cavity obliterated compared with 80% and 100%, respectively.The DPF is a safe film that is effective in preventing IUA formation after intrauterine curettage in rats.

Double-hydrophilic block copolymers (DHBCs), consisting of at least two different water-soluble blocks, are an alternative to the classical amphiphilic block copolymers and have gained increasing attention in the field of biomedical applications. Although the chemical nature of the two blocks can be diverse, most classical DHBCs consist of a bioeliminable non-ionic block to promote solubilization in water, like poly(ethylene glycol), and a second block that is more generally a pH-responsive block capable of interacting with another ionic polymer or substrate. This second block is generally non-degradable and the presence of side chain functional groups raises the question of its fate and toxicity, which is a limitation in the frame of biomedical applications. In this review, following a first part dedicated to recent examples of non-degradable DHBCs, we focus on the DHBCs that combine a biocompatible and bioeliminable non-ionic block with a degradable functional block including polysaccharides, polypeptides, polyesters and other miscellaneous polymers. Their use to design efficient drug delivery systems for various biomedical applications through stimuli-dependent self-assembly is discussed along with the current challenges and future perspectives for this class of copolymers.

A simple and efficient way to synthesize peptide-containing silicone materials is described. Silicone oils containing a chosen ratio of bioactive peptide sequences were prepared by acid-catalyzed copolymerization of dichlorodimethylsilane, hybrid dichloromethyl peptidosilane and either Si-vinyl or Si-H functionalized monomers. Functionalized silicone oils were first obtained and then after hydrosilylation cross-linking, bioactive PDMS based materials were straightforward obtained. The introduction of an antibacterial peptide yields PDMS materials showing an interesting activity against Staphylococcus Aureus. In the same way, RGD ligands-containing PDMS demonstrated improved cell adhesion properties. This generic method was fully compatible with the stability of peptides and thus opened the way to the synthesis of a wide range of biologically active silicones.

This website uses cookies to improve your experience while you navigate through the website. Out of these, the cookies that are categorized as necessary are stored on your browser as they are essential for the working of basic functionalities of the website. We also use third-party cookies that help us analyze and understand how you use this website. These cookies will be stored in your browser only with your consent. You also have the option to opt-out of these cookies. But opting out of some of these cookies may affect your browsing experience.
Necessary Always Enabled

Any cookies that may not be particularly necessary for the website to function and is used specifically to collect user personal data via analytics, ads, other embedded contents are termed as non-necessary cookies. It is mandatory to procure user consent prior to running these cookies on your website.