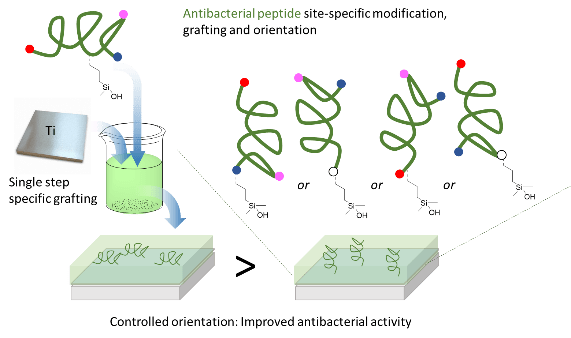 Relying on a membrane-disturbing mechanism of action and not on any intracellular target, antimicrobial peptides (AMP) are attractive compounds to be grafted on the surface of implantable materials such as silicone catheters or titanium surgical implants. AMP sequences often display numerous reactive functions (e.g. amine, carboxylic acid) on their side chains and straightforward conjugation chemistries could lead to uncontrolled covalent grafting, random orientation, and non-homogenous density. To achieve an easy and site specific covalent attachment of unprotected peptides on titanium surfaces, we designed hybrid silylated biomolecules based on the temporin-SHa amphipathic helical antimicrobial sequence. With the grafting reaction being chemoselective, we designed five analogues displaying the silane anchoring function at the N-ter, C-ter or at different positions inside the sequence to get an accurate control of the orientation. Grafting density calculations were performed by XPS and the influence of the orientation of the peptide on the surface was clearly demonstrated by the measure of antimicrobial activity. Temporin amphipathic helices are described to permeabilize the bacterial membrane by interacting in a parallel orientation with it. Our results move in the direction of this mechanism as the selective grafting of hybrid temporin 2 through a lysine placed at the center of the peptide sequence, resulted in better biofilm growth inhibition of E. coli and S. epidermis than substrates in which temporins were grafted via their C- or N-terminus.